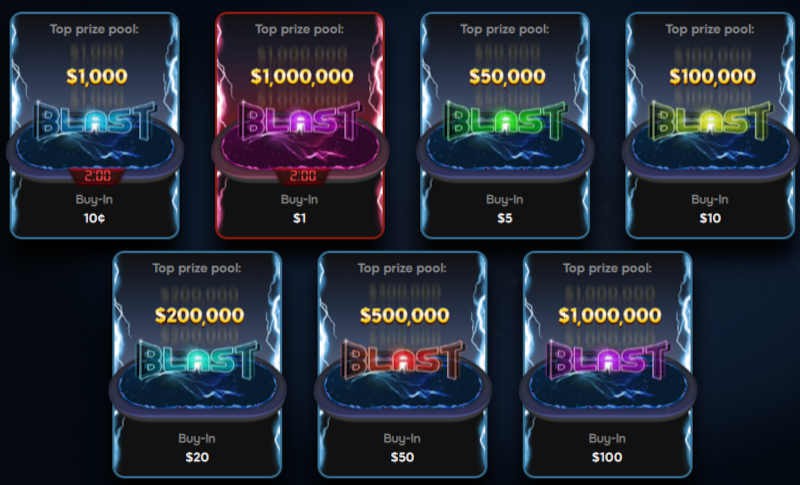 888poker Blast Offers a Shot at $1,000,000 Prizes for $1 Buy-ins – 888poker is the only operator to offer a $1,000,000 prize pool at the $1 buy-in level of its popular lottery-style sit and go Blast game. Ever since Winamax introduced lottery-style sit and goes with their unique-at-the-time Espresso format , the popularity of these games kept on rising. All major poker operators soon followed suit, adding their own variation of these games, with 888poker introducing Blast back in 2016 .

Most poker players are familiar with the basic concept of these games. They are fast-paced, three-handed tournaments, where the prize pool is determined randomly at the start of the game, ranging from two times the buy-in to 10,000x+. The premise is pretty much the same across all operators, but one thing makes 888poker Blast events unique and very appealing, especially to casual players.

Namely, this is the only room that offers special $1 buy-in events where the massive prize pools can even potentially reach seven figures . While it is a rare occurrence, as one would expect, the possibility of turning the small, virtually negligible amount into $1,000,000 has a massive appeal.

PokerStars, another prominent name in the online poker world, has featured many special $1,000,000 Spin & Gos (their lottery-style format), but the lowest buy-in has always been at least $5. It may not seem like a big difference on the surface, but the idea of turning $1 into $1,000,000 somehow has a better ring. 888poker Blast Odds Explained

It would be misleading to make it seem like you can expect to play a few dozen or even a few hundred of these $1 Blast events and expect to get lucky. The odds of triggering the massive prize pool are much longer, at 1 in 10,000,000. Those are similar odds to getting five correct numbers in a Powerball draw, so it doesn’t happen very frequently.

It only happened once thus far at the €1 buy-in in September 2021. Three poker players from Italy sat down to have a bit of fun, and moments later, they were left in disbelief as the […]