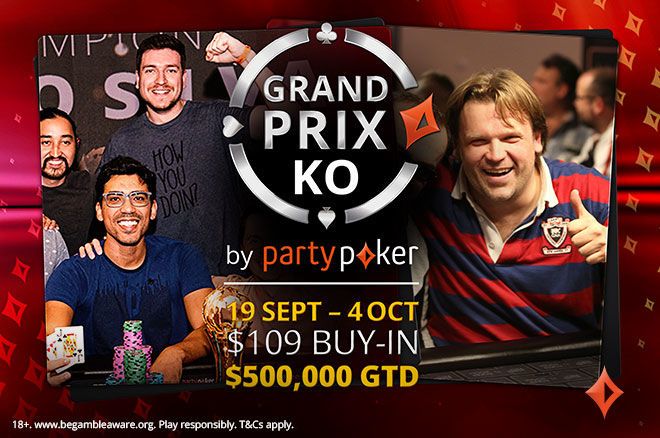 partypoker Grand Prix KO Series The WPT World Online Championships concluded at partypoker this week when Rok Gostisa came out on top in the $5,300 buy-in Main Event and walked away with $959,493. The online poker giant has wasted little time in unveiling its latest poker tournament festival, the Grand Prix KO Series .

partypoker Grand Prix KO Series is the online version of the popular live tour. It runs from September 19 through to October 4 , and each event is played in a progressive knockout (PKO) format. PKO tournaments continue to be extremely popular, not least because they give players the chance to win plenty of money without the need to finish in the money-paying positions.

This latest series features 16 numbered PKO events with buy-ins ranging from $5.50 to $530 , meaning there is a partypoker Grand Prix KO Series tournament for everyone regardless of their skill or bankroll level.

The events have several flights running across all time zones, which makes it possible for players around the globe to test themselves on the biggest stage. Grand Prix KO Series Highlights

Without a doubt, the Grand Prix Main Event is the highlight of the festival. It features more than two dozen starting flights, each costing $109 to enter, and boasts of a $500,000 guarantee prize pool.

Main Event players receive 100,000 chips and play to an eight-minute clock where blinds start at 400/800/100a. Late registration remains open for 12 levels, and players are permitted to re-enter once per flight should their first attempt no go to plan.

Each Day 1 concludes when only 15% of the field remains , and those top 15% progress to Day 2 where they are guaranteed to receive a least a min-cash in addition to any bounties they accumulated along the way.

Sasa Lukovic won the previous edition of the Grand Prix KO Series Main Event. Lukovic outlasted 5,406 opponents on his way to banking a combined score worth $50,159.