There Was a Crazy Chop Pot on the High Stakes Poker Season 10 Premiere Too! 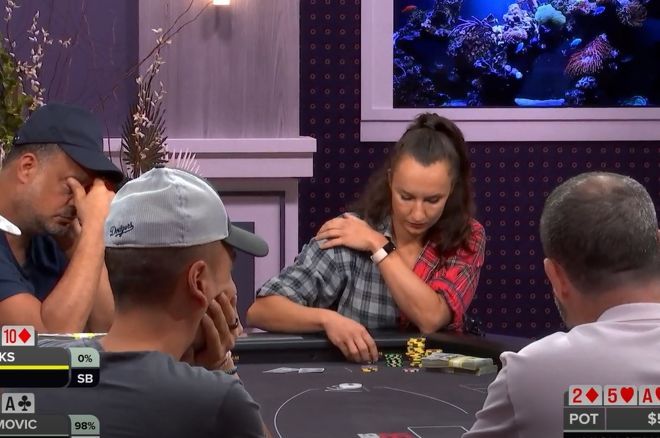 high stakes poker Tuesday, January 24, 2023 should forever be remembered in poker as Chop Pot Day. First, it was a fumbled split pot in the WSOP Circuit King’s Resort Main Event , a hand in which a player mistakenly busted. Then in the evening, PokerGO viewers witnessed an equally entertaining, albeit less controversial, chop pot during the High Stakes Poker Season 10 debut.

For those who missed our story Tuesday morning , a poker player ( Pierre Kauert ) didn’t realize he should have chopped the pot in the WSOP Circuit event, and neither did the dealer or live-stream announcers. Instead, he was out in fifth place and no one said a peep to him about it until it was too late, although it did appear that some players at the table may have noticed the pot should have been chopped. Everybody Loves a Chop Pot

Ema Zajmovic Later in the day, PokerGO released the first episode of the newest High Stakes Poker season, and viewers witnessed yet another wild split pot. In a $200/$400 no-limit hold’em cash game, Eric Persson , who bought in for $400,000, called from a middle position with before Jennifer Tilly raised it up to $2,000 with next to the button.

Ema Zajmovic , holding , three-bet it from the button to $7,000, which led Matt Hanks , in the small blind, to four-bet to $25,000 with . Feeling trappy, Zajmovic made the call while the others folded. The flop came out , leaving Hanks drawing dead to winning the hand outright.

With Zajmovic having just $61,000 behind and the pot already over $50,000, Hanks decided to put her all in with his top pair. She wasted no time in calling, and her opponent needed a runner-runner straight just to split the pot. But this is Chop Pot Day, so of course the board ran out the on the turn and the on the river. They chopped up the $176,000 pot, which should constitute as a bad beat even though nobody lost the hand. Persson, Tilly Show Aggression