Huge $30,000 Platinum Pass Up for Grabs at Road to PSPC Maryland 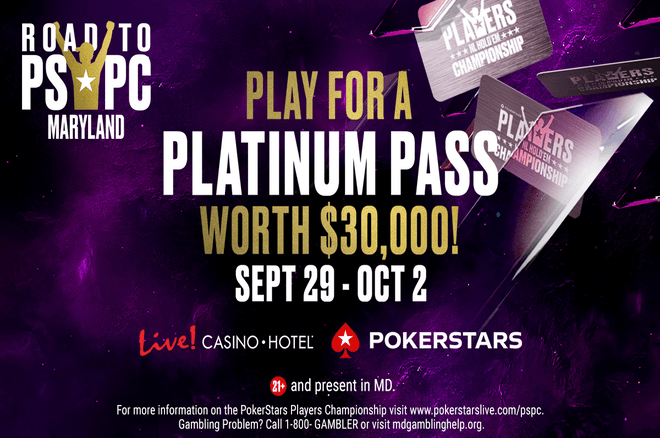 Road to PSPC Maryland The folks at PokerStars had the poker world rocking last April, with the announcement that the company would head back to the Bahamas for new editions of the PokerStars Caribbean Adventure (PCA) and PokerStars Players Championship (PSPC) in January 2023.

Since then, PokerStars has launched online mega paths and Road to PSPC events , and thousands of players have tried to get their hands on a coveted Platinum Pass which entitles them to an epic poker package worth $30,000.

The Road to PSPC tour now heads to US soil for the first time, and takes place at Live! Casino Maryland from September 29 through to October 2 . Here, players can participate in the $360 buy-in Road to PSPC tournament, which will see the winner walk away with their very own Platinum Pass alongside some cold hard cash.

$250,000 Guaranteed Prize Pool at Road to PSPC Maryland Road to PSPC Maryland has five starting flights, with the first two Day 1’s scheduled for September 29. The rest will then play out over the next few days before the fields merge for October 2’s Day 2.Players will begin the event with a 30,000 starting stack and will see levels increase every 30-minutes. For Day 2, the tournament clock will be extended to 40-minutes. The late registration period is open for six levels and players are allowed unlimited reentries in this time.The Day 1 flights will wrap up when just 12.5% of the field remains. Players can enter multiple Day 1 flights but only their largest stack will be carried forward. Road to PSPC Maryland Satellites A few days before Road to PSPC Maryland officially starts, there are several opportunities to satellite your way into the event for a fraction of the price. Three $50 satellite tournaments kick off before Day 1a begins, with the first taking place on September 26. The remainder […]